Periodontal diseases, also known as gum disease, are some of the most common diseases in the United States.

In fact, more than 70% of American adults over age 35 have some form of periodontal diseases. Despite the number of people infected with these types of diseases, most believe they don’t have them. In a recent survey, 8 out of 10 Americans believed they did not have periodontal disease, but 7 out of 10 exhibited one or more symptoms.

Periodontal disease can be diagnosed and treated by your dentist/periodontist. A periodontist is a specialist with advanced training in the prevention, diagnosis, and treatment of diseases affecting the gums and supporting structure of the teeth. Our skilled dentist, Dr. Anne Nicholas, works closely with periodontists to provide you with the best possible gum treatment in Palm Desert, California.

At some point, most people will suffer from periodontal disease.
Find out what causes it — and what you can do. 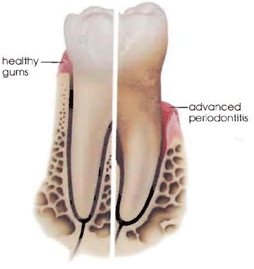 Plaque that should have seen removed by brushing or flossing has now become calculus, which you cannot remove yourself.

What causes periodontal disease?
Bacteria are the primary cause of periodontal infection. Bacteria form in plaque, which is a sticky, almost invisible film that forms over the teeth and destroys bone. Plaque that is not removed by regular brushing and flossing hardens into tartar over time. You cannot remove tartar (or calculus) on your own. The only way to remove tartar is by a procedure called scaling, which is done by a dentist.

What are the stages of periodontal disease?
Stage 1: Gingivitis
In this early stage, your gums may look normal, but they may also be red, puffy, and 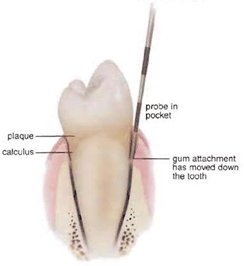 bleed easily when you brush your teeth. You also may notice some mouth odor. This is because bacteria in plaque have caused infection.

Stage 2: Early Periodontitis
Early periodontitis occurs when the bacterial infection spreads from the gum to the bone that supports the teeth. The bacteria then cause small spaces or crevices to form between the gums. These crevices are called pockets. They are deeper than normal spaces, which measure 1 to 3 mm deep. Bacteria in the pocket also can destroy some bone. As the pocket grows and the amount of bacteria increases, the gums recede down the root of the tooth, increasing the pocket depth. Your dentist measures how deep your pocket is with an instrument called a periodontal probe, which is placed in the gum crevice.

Stage 3: Moderate Periodontitis
When the gum has crept further down the root, it is called moderate periodontitis. 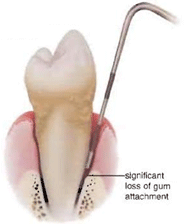 In this stage, up to one third of your bone has been lost.

Stage 4: Advanced Periodontitis
When half or more of the original bone holding the tooth has been lost, and pockets are very deep, it is called advanced periodontitis. The tooth may appear longer because the root is exposed, and the tooth may loosen and eventually fall out, or have to be removed by your dentist.